We had a particularly violent thunderstorm roll over us this afternoon and when I went out later in the evening to do chores and pick up all of the downed tree branches, I found the remnants of a nest....and then I found the babies scattered about. I thought they were all dead, which always makes me sad to see. Poor little featherless things. I started picking up the little bodies to dispose of, thinking they were all dead...and one moved.

One was dead for sure, another I wasn't so sure about and two more had the faintest of movements. They were all ice cold.

So I grabbed the 3, ran into the house, bundled them in a hand-towel, warmed another one in the microwave and bundled the warm towel around them.

I have this 'thing' I guess, I hate to see anything die cold and miserable. I doubted any of them would survive, but at least they would be warm when they died.

Is it weird to think that way?

Well, the one did not warm up. He was dead.

But, at this moment, I have two little cheepers, bundled in their towel, quietly cheeping in their sleep. 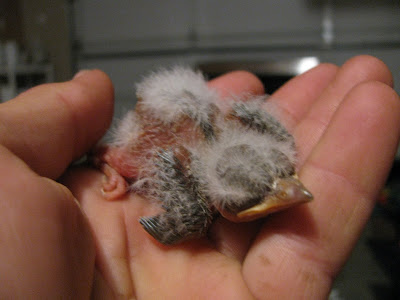 Ya know...this is how we got stuck with a crazy-ass squirrel as a 'pet'. Now I have to figure out how/what to feed two tiny little birds?

The freaking veterinarian is going to think I am crazy as hell when I go in and ask him what to feed helpless baby birds.

Well, short of buying/digging and grinding up some earthworms in your blender... yuck! Seems to me that Mikey posted about feeding some blown down baby birds watered down canned dog food. Maybe cat food might work just as well? Unfortunately, except for the duckling last year, none of the ones I've had experience with survived. And the duck was probably a fluke! Good luck!

Howdy, we put the baby birds in a paper/wood/ straw shavings nest inside a plastic hanging gourd and watched and listened for the parent birds. We saw them hanging around a tree looking for their chicks. We hung the gourd with the babies from that tree. The chicks started to chirp and the parents found the new nest after 5 hours began to feed them. Birds do not care about scent, timing is key. Watch the new nest from a distance to make sure the parents are feeding them. This has worked for me several times. Hand raising birds is messy and not fun and they usually do not make it. The parent birds will do the best job. Good Luck.

Are there any remnants of the nest that you can use and make a new nest like Ruthlynn suggested? They are pretty young, and probably won't survive unless mama and papa take care of them.

I had one that I saved feeding canned dog food with raw egg mixed in it...the first one I killed when I gave it water. Don't give them water! They are such fragile little things it's a wonder any of them survive...

Not a clue but it sounds like Ruthlynn has about the best idea I have heard so far. Wouldn't hurt to give it a try. At least then you may still only have the crazy-ass squirrel.

Hope the little birds make it.

Aww, they are so cute! I did do the canned dog food, which is what I read on the Internet, but it's hard to do. I ended up just putting them back and hoping for the best. Ours are forever falling from the eaves. I just don't have time to feed them and the calf too and get anything else done.
One thing I did notice, to get them to cheep and open up, I put them in a well lit area, then brought my hand up and shadowed over them. They thought mama was here and opened right up to be fed. That's the only helpful suggestion I have, lol.

They made it through the night. I kept them snuggled in their towel under the blankets with me-LOL.

This morning when I uncovered them, they both popped up with wide open mouths.

I took Ruthlynn's advice and put them back. The best I had was a little pail that the nest fit in. I cut a hole on the side and hung it as far up in the tree as I was comfortable climbing. About the same general direction as the nest was.

I know the parents were looking for them this morning when I was doing chores, but I haven't seen them back since I hung them back up there.

I guess if they don't come back around by this evening, I had better try the dog food. I'm guessing they can survive 24 hours without food?

Check on the No Water. I made that huge mistake with some new hatched chicks when I was a teenager.

Well, they are back in the house. By 6pm the mother had made no appearance and the two little peepers were starving.

I mixed a bit of the dog food with egg and Meg and I used tweezers to feed them. They were not shy about that. Geez!

I don't know how much a person should give them at one time, so we only gave them 4 little bites. They settled right down and took a little nap. About an hour later they were cheeping again, so we fed them a little bit more. Now they are sleeping again and seem settled in for the night.

So far they both seem strong and eager to eat. Hopefully they hang in there, but I warned Meg that they usually don't survive. I guess if anyone can keep them going it will be Megan. She raised some Sharp-Tailed Grouse babies and that is near impossible in captivity.

Awwww, BEC, you are a baby-bird whisperer too?

Good luck to the little creatures. Got any bugs you could grind up for them, too? Nice big grasshoppers, throw 'em in a blender, remember to wash the blender after;)

Aw, the poor little things. Nature is pretty harsh sometimes - glad you are trying to nurse them... They are lucky they live in your yard!

Id like to invite everyone to read a blog post today of a woman who joined the old order Mennonite church from the outside. I'm extremely lucky in publishing her very first, and most likely last post on Amish Stories. A lot of work was involved in her getting permission to be even able to write anything on the internet, and permission was given by her bishop. So please stop by and read about a woman who gave-up her car and other worldly possessions for the person that she loved. Richard from Amish Stories.

You have such a big heart !

Ok.. what is happening w/ the babies? I'm dying to know. On my side of the desert, I'm screaming at the top of my lungs when my Paparazzi (min schnauzer) is hot on a baby bird who is just starting to fledge.. am so glad I took him to classes and he does understand the words "leave it". Best Wishes on your new babies :)

Ok.. what is happening w/ the babies? I'm dying to know. On my side of the desert, I'm screaming at the top of my lungs when my Paparazzi (min schnauzer) is hot on a baby bird who is just starting to fledge.. am so glad I took him to classes and he does understand the words "leave it". Best Wishes on your new babies :)

Glad to hear they're surviving thus far! And to learn about the egg/dog food thing. I had no idea water was bad - there's a new piece of knowledge for the day, and it's not even 9 am :)