Did ya miss me? LOL

I hate to say, but there just has been nothing worth talking about lately. The normal routine has hit and it's about like watching paint dry.

This afternoon I headed over to the trainer's to see how the big bay horse was doing. He's been there for a month now and Levi finally has him riding. It hasn't been as easy of a go as what we thought it would be. Jet is far from rank or anything...he just has a hard time overcoming his natural bred-into-him instinct to run. He's been awfully goosy and grabs his butt a lot...but hasn't ever bucked.

Levi has given me cautious updates, but nothing really glowing. After watching him ride Jet today, I think he is just careful not to exaggerate. I think the horse has come a long, long way and is doing quite well.
Levi can saddle him straight off... 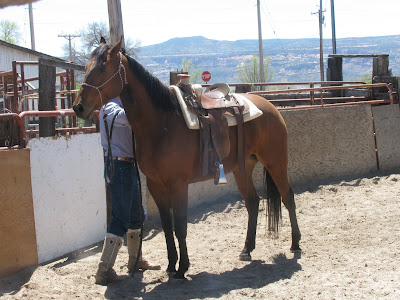 Does a bit of round pen work to get Jet moving out and then focused... 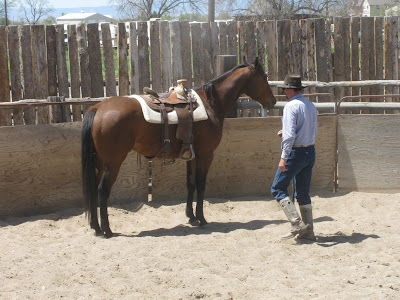 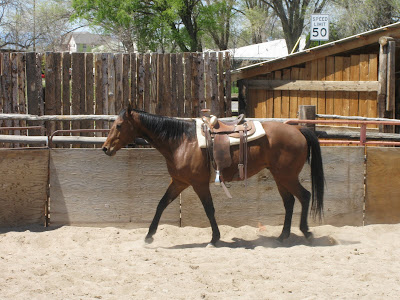 Steps on, does a bit of flexing, gets Jet's feet moving and then rides off... 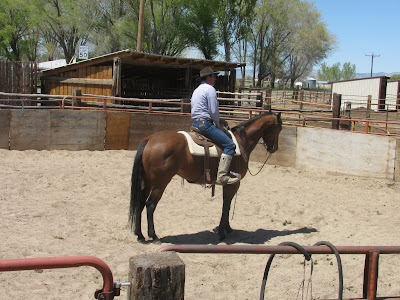 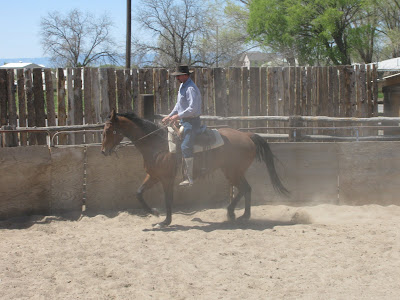 Jet walks out well, trots and is loping both directions. His is still pretty stiff on his right side and Levi and I had a pretty good discussion about that today. I watched every step the horse took and can see no traveling reason why he is struggling so much that direction. He moves his shoulders and hips and strides up underneath of himself evenly. After watching Levi work on some fairly intricate maneuvers-bending, moving hips in and out and working on the fundamentals of the turn-around, I think it's nothing more than Jet's brain has not connected to that hip yet. He seems to find it confusing when he is expected to set that foot and balance on it. I watched him time after time, reach up under himself and when Levi would ask him to set that foot to start a turn around, Jet, instead of doing that, would pull that foot back and try to rotate off of the left foot. There is no physical reason for it...more like a lack of coordination.
It may seem mildly absurd to worry about something as simple as that, but it's those kinds of little things that can make learning difficult and cause problems down the road. I would just as soon Levi spend the time helping the horse get the steps correct right off the bat, than have to go back and fix it. One day, Jet's brain will connect to that hip and it will be like it was never a problem.
Levi may have felt that things were moving a bit slow to get to this point, but I am plumb happy. There will be no holes in this horse when I get him back and that is what's important to me.
Posted by BrownEyed Cowgirl at 6:35 PM

Well, that ought to make him plumb easy to feed and clean up after.

My guess is Levi had an idea in his mind how long he thought this might take and it's taking longer so that's the source of his angst.

I remember when I first took Legs to get started I knew the trainer would have an idea in her mind how long it would probably take to get the job done. Based on knowing the horse already so she knew his work ethic and then his conformation and her level of experience, she did have thoughts about how he'd work. Because he didn't meet those we were able to finally diagnosis his rotated pelvis.

Lucky for both of us, good trainers might have that set idea but don't work to it. Instead they go with what the horse needs. I think it's pretty cool you have such a trainer to fix your horse.

Nothing wrong with doing it right the first time, no matter how long it takes. You'll have a better horse for it. He looks quite handsome under saddle. :)

He looks great! Nice ass:) I just thought I would suggest that maybe he is the kind of horse that needs to be given a reason to use himself... sometimes with reiners it helps to work them on cows to get their maneuvers less mechanical and more instinctual.

He's a great looking horse for sure. I think he's come along great, and no worries, he'll get it together. He looks like he's going to be fun to ride :)

We all understand that you can't always create the perfect pony in 30 days. Levi seems to be straight forward and honest enough to not want to over sell.

Levi wants to be a jumper;) Man, he's a handsome bugger.
Thanks for the big bay horse fix.

Kudos to your trainer for not rushing the job and doing it right. I remember once I asked one trainer who didn't have any openings for training, if she could recommend another trainer; her reply was "she puts together a nice futurity package". I went running for the hills.

I agree with Mikey. It's so easy at that stage to pick on em, ESPECIALLY when they are at the trainers and you are watching.

It's weird having to balance yourself with a rider on your back. I have noticed that while some horses seem to catch quickly they still really don't get great at until they have been ridden for like 2 years.

He'll be fine and like always they will come along at their own pace not ours... despite how frustrating that can be.

He looks good! And I am totally in agreement, might as well fix the problem when it starts rather than try to fix it when its ingrained. Sounds like a good trainer!

Ooohhhh-I thought Jet looked pretty handsome under saddle too. Imagine what he is going to look like in an English saddle?

He is going to have a beautiful level headset (natural) and fairly floats when he trots. GL is right...he has H/J written all over him.

C-Jet only has about 10 rides on him. When he gets farther along, Levi will start taking him to the cattle sale barn he works at and using him in the alley. That kind of work is wonderful for ALL horses. They have to do the same thing over and over and over, nice and quiet like.