I Don't Think He Appreciates This 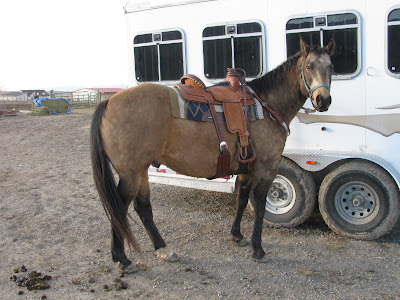 Is not as fat as he used to be. His belly is pulling up and his globs are going down.

Frosty is the horse that really brought Insulin Resistance into my vocabulary. For years now, I have thought a lot of unflattering things about him, mostly about his mental capacity, but last year was just the worst time I have ever had with him.

I felt like I was practically starving the poor horse and he just wasn't losing any weight. He started bucking me off. He acted overly sore throughout his body and when he started getting really tender-footed, I was at a loss. There was just sooooo many little things going on and it all ended up in one big mess.

Thanks to a bunch of reading, he is well on his way to recovery. He has been on Horse Sense since January, he is on a limited, but reasonable diet and the weight started coming off right away. First the globs and now the belly. This last week of ponying and riding every day is making a huge difference.

I do wished I could say that I think the bucking fits are behind him, but I don't think we have gotten beyond that yet. However, I think I figured out the trigger to them and have so far been able to stay one step ahead.

One of the things I read about IR is that the horse's muscles lose elasticity. Hence their tendency to become so sore in the body even when being used lightly. Well, one thing I will say about Frosty is that he is not a very stoic horse. Unlike Spooks, who was probably just as stiff and sore. Once upon a time, Spooks was a working horse, so his ethics are different than Frosty's. Frosty has never really worked in his life and when he decides he is done, he is like a petulant child. He just doesn't want to move anymore. He will only take so much bumping with the leg before he has had enough and he just blows up.

I figured a lot of ponying would be good for Frosty. When he is with another horse, he does try a little harder. But...I still need to be riding the horse. Ponying and lunging is good exercise, but it's not going to create a broke horse. So, after a lot of thought, I figured out maybe the best solution would be to ride Frosty til he gets to that 'I-don't-wanna-go-anymore' spot and then get off and lunge him. And that is what I have been doing.

It doesn't take very much riding, maybe 15-20 minutes and Frosty is governed out. It's like it just becomes an effort for him to pick one foot up and put it in front of another. The loss of energy is apparently a very common problem with IR horses. I can feel when Spooks bottoms out as well, however, I don't fear his reaction to my repeated asking of him to keep moving the way I fear Frosty's reaction.

Yes, I am actually a bit fearful of the big buckskin. Oh, my gosh...he is probably one of the smoothest, easiest riding horses I have ever rode. He just a rocking chair. But when he blows...there is no way I can ride the tornado he turns into. I've stuck with him a couple of times, but for the most part he is just so quick and powerful, I'm off before I even have time to grasp the fact he has just blown up. (I do breed for athleticism remember? LMAO)

Frosty doesn't want to move when I get off and start lunging him either, he likes to keep facing up, but it's a whole lot safer for me to chase him around to make him move, than to be picking myself up off the ground. LOL. Another 15 minutes or so of lunging at an extended trot and a working walk and fat boy is a huffing and a puffing. This is what he needs to get those bound up, out of shape muscles of his to working again. He's also learning he has keep moving, regardless of what he thinks...At least that is my hope.

I cool him out by hand-walking him. It's actually good exercise for me too. I walk a lot back and forth with the horses, but I hardly ever just get out and walk. By hand-walking Frosty, I am getting some exercise and he has to do a little power walking himself to keep up with me. The goal is to get him freed up and by whatever means necessary get some elasticity back into his muscles.

This week has been pretty good. The real test will probably come in the next couple of weeks. Always before, it seemed that about week 3 or 4 is when Frosty's brain started to have melt-downs. If we can get through a month, without any major blowups, we will have made it farther than I ever did before on him and I just keep hoping this year, we will come out the other side. Frosty is an incredibly nice horse. I think he has a lot of potential as a barrel horse. I'd sure like to be able to tap into that potential.
Posted by BrownEyed Cowgirl at 8:47 PM

Interesting thing about the IR. I wonder if there is a trigger for it in horses as there is for humans.

I hope your strategy with him works. There's nothing more frustrating that knowing you have a great horse you can't work to their potential. That's for sure.

Sounds like a good plan to me! Any plan that doesn't involve getting bucked off is a good plan. I love the pic, he looks so startled about having the stupid saddle on his back agaiiiiin.

Have you seen that email forward of the like 6' of snow in SD? I thought of you and how nice Colorado must be in comparison!

MiKael-I think Frosty was riding the line on IR for several years. Last winter when I boarded him and he was fed all of that super hot hay is probably what set him over the edge.

My personal feeling is that IR is genetic. I have not seen any research that supports that, but it's just the feeling I am getting from where I am encountering it in our herd. Spooks and his full sister both show indications and it is probable that their mother suffered long-term IR. We only owned her for a couple of years, but she had some weird health things that we never could figure out. Frosty and his mother seem to suffer similar issues and the 5th horse we have that is symtomatic, well, his mother had 'issues'.

Like I told my mom, if it is genetic...we are at the end of the line of it anyway. The only one's left are the 3 geldings that we have figured out that supplementing for IR is a benefit.

Funder-No I haven't seen that email. (My email addy is on my profile page). Talked to mom this morning. I was riding in a sweatshirt, no hat, no gloves and she is telling me that there is 15 inches of straight-up snow in the corrals. Y.U.C.K!! Glad I'm not there. LOL

Sounds like a sensible program, hope it works. Staying safe is the most important thing.

Poor Frosty! He thinks you are a mean mommy! LOL! Mine are in for a rude awakening next week when the stalls are finished and we get to work. I'll be glad to have somewhere to put one while I work the other, as I don't even have a decent place to tie anyone in the mean time.

Then, the plan is that the dogs and I can play in the pasture and work on commands during the day, while the horses are put up. I'll turn them out at night. Maybe my black horse will stay black this year and not turn bay with this plan.

Good for you for figuring it all out. A Big ol Bucking horse is no fun! I ll be waiting to see how it all works out!

Be interesting to see how Frosty turns out on this new program.

Having left bucking school for a less challenging major in equine riding, I can't imagine how fun it is to ride that big buck! I hope you get it all figured out and help Frosty come into his own...

Course, I'm partial to buckskins, so I'll be routing for ya!

My mare is that way...smooth as can be. Great ride...until she blows. She makes a great broodmare by the way. Until they figure out how to make geldings do that though I think you're stuck.

Sounds like a good plan, he is a good looking fellow would be nice if you can get his problems all resolved

This is so interesting I have never heard of IR in horses. What genetic line that runs through breeding do you think is the cause?
Frosty is such a nice horse I hope you succeed with her. At least you will know that you have done everything you can. I think dismounting and doing ground work is a great idea.