The Boys And Their Toys

Like much of the country, we are experiencing some bitter cold, but thankfully none of that nasty white stuff.

The wind yesterday was bitter enough that I pulled all of the geldings off of the pasture. Luckily the house provides a decent windbreak to their pens and I even bucketed warm water to them. Now, ya'll know it must have been cold for me to to do that-LOL. Ya, ya...every once and a while I have to soften up a little and make those rotten ponies feel special.

This morning, dawned still bitter cold, but clear and by tomorrow we will be well above freezing again and then back into the 40's.

And that's your weather report from western, central Colorado...LOL.

My idiot dogs don't care how cold it is though. They hovered around me while I was doing chores...begging me to play with them... 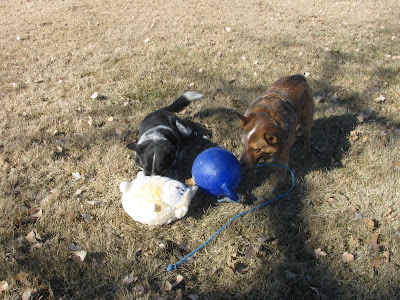 Each dog has a favorite toy now and each of them carries their toy with them pretty much everywhere I go. Just on the off chance, I'll take a second to kick it for them.

Of course there is Red Dog's ball... 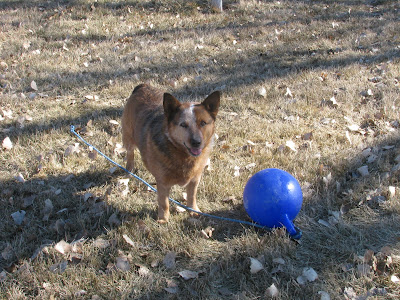 The dog is maniacal about his Jolly ball. No big surprise...those of you that have heelers know what they are like and those of you that have Corgi's know what they are like. Combine the two and you have...a Red Dog. He was trying very hard to get back in my good graces this morning because yesterday, he went into working mode and almost got me run over several times as I was bringing horses in. Every so often, he just cannot help himself and he thinks he has to help me by heeling a horse. I do not appreciate this, even though he has never actually bitten one of the horses. Number 1-I don't like getting run over by one of my fat crew as they try to avoid getting nipped and Number 2-I don't need a damn vet bill from the dog getting kicked in the head. So RD got spanked with a lead rope and told to get to the house. The spanking he could care less about. Not being able to help mom?

He sat diligently on the corner of the cement pad and watched my every move...Hoping I would relent and let him help again.

Yeaaaa...NO! Sometimes I just don't have time for his shenanigans. I don't care how much HE thinks he is helping.

My baby boy, Ute on the other hand...Not so much a worker. He's my lover. And he has been over the moon for the last couple of days because he now has a sheep again... 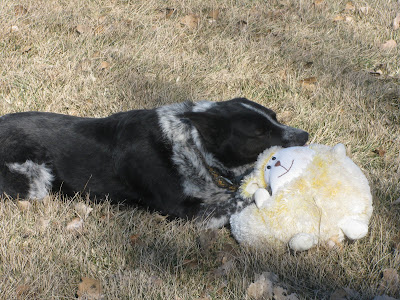 When I got Ute as a puppy, My Honey bought him a small stuffed sheep that squeaked. Ute fell in love with that toy and carried it everywhere. He was very gentle and loving with his little sheep. He would lay forever with it between his paws and gently turn it, while gently biting it, looking for the squeaker. When he found the squeaker, he would bite it rapidly and then look at us all with a surprised look on his face. Every single time. It was quite funny.

Well, along came Red Dog...who was a holy terror and he tore Ute's little sheep to shreds (along with a whole bunch of other stuff). Poor Ute carried the remnants of his little sheep around for quite a while, obviously distraught that it no longer could be made to squeak. We tried a few other toys, but anything with a squeaker in it drives RD to instant destruction. He simply must get to that squeaky thing.

Well, this sheep does not have a squeaky and RD has his ball now. Ute may finally be able to keep a toy all to himself.
Posted by BrownEyed Cowgirl at 11:16 AM

Dogs are so goofy about their toys, I swear. Love the sheep, lol.

They're both so cute...love that sheep!!!

Your boys are adorable! We considered ACD's ourselves but have gone the Aussie route.

Roxanne, my Dane, had a pink dragon that we bought her when we first brought her home. Over time, when she could entice Copper to play tug, it got shredded. Took quite a while though.

Copper's favorite toy is a Skineez fox. Yeah, it gets shredded with tug too. And he loves tennis balls that Rox crushes for fun. I don't think she wants her brother to have toys he enjoys.

BTW, I just wanted to add, I love you. Thank you for helping a certain someone who really needed friends in her corner. :)

You are such a mean mommie... not letting RD help you! lol I can just picture his heartbroken little face.

Love Ute and his sheep. Reminds me of my Comet and his beloved stuffed toys that Tucker the Boston Terror just LOVES to destroy. Poor Comet has no more snuggly toys, not even a stuffed dog bed.

I'm jealous that you can see the grass... not us, we got nailed with the snow.... 15 inches.... it would be nice to have my horses at my own place, instead I get to drive in the nasty weather... which of course led me to getting stuck in a massive ass snow drift. That'll teach me to just back up without looking! lol

That is so cute - and sad that he sheep was destroyed. Mind do that - pack toys around just incase I might happen to have time to play with them....

Delilah, too, cannot tolerate anything with a squeaker inside and Sugar loves toys with squeakers. Poor Sugar does without because of Delilah's destruction. It's just not fair.

That sheep is just adorable. And Ute wrapped all up in it, priceless.