Needing A Kick In The Butt...

Ugghhhh....
I have become extremely laaayyyy-zzzeeeeee over the last couple of weeks and I need a swift kick in the butt to get rolling again.
It's been nice though. My Honey has had quite a bit of time off lately, has gotten rested up and even started a diet as soon as we got home from Vegas. Eleven pounds in two weeks!
Men!
Doesn't it just drive ya nuts that all they have to do is eliminate a few things from their diets and the pounds just melt off of them?
We had planned on heading to Arizona for several days after Christmas, but I found out my nephew and his mom are staying with her family on the other side of Colorado over the holidays and we made arrangements to go over the mountains to pick him up for a few days. I haven't seen my nephew since the summer of '06. We're all pretty excited to get to have him until after the New Year.
So, I guess the ponies will get a few more days off.... 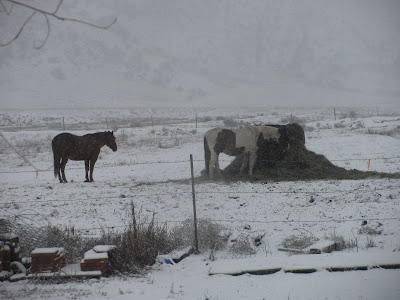 Although, it ended up being perfect timing as we woke up to a bit of winter this morning. It's not cold or anything (although snow always makes it look so). As you can see, I got really lazy and started letting the boys free feed. I thought I would try it to see if they were going to gorge themselves and waste a bunch of hay, but these ranch ponies know the routine-LOL. Once they get filled up, they come and go. It's going to reduce my hay costs by about half. LOVE IT!

Posted by BrownEyed Cowgirl at 7:46 PM

And think of the free time you will have! I love round bales--I must, we feed hundreds a year. Since I am allergic to hay, the less I touch it, the better.

Of course, because of the free feeding, the horses are way too damn fat, but if I would get on some more often, that could be remedied. That is my New Years Resolution

I hear you on the lazy, time of year I guess, I feed and check , but thats it these days, waiting for warmer weather, or something

I'm having trouble getting motivated as well. I think it's all that sugar in my system, I'm moving like a slug and really wanting more fudge instead of physical activity.

We had snow this morning as well. The ground is so warm the snow is already lumping looking as it's melting away.

We don't see round bales here often but I sure wish I had enough land for my horses to be living outside instead of stalled. It would sure be a lot less work.

I am super motivated this year. Indigo and the others are super fit. Today Indigo and I hauled some trees out of the bush that were dead. I love having a horse thats sensible and can do it all I guess thats my motivation. If it's too muddy to ride one day we take the stone boat out.

Yikes look at that snow!! Brrr. Ya know, we might actually get some. Tomorrow night's sposed to be 21-31 degrees. I may not make it, lol. I'll have ALL the critters in the house.
Be lazy. You deserve it!!

You're just exhausted from lugging that ginormous rock around on your left hand :)

Went to see the ponies today - was so nice on our side of the divide. But your storm is headed our way tomorrow.

Hey, there are people who do NOT have horses, ya know. Get yer butt movin.
:)

I love round bales too, and even if they eat more it still costs less!

I am motivated, mostly because my horse is doing so awesome I just want to ride everyday and this darn cold weather is getting in the way, so I guess lazy is in order till it warms up.

We'll free feed in the winter too and yeah they get it figured out pretty quick and we also seem to save some $$$ on hay that way. It's good too because Patrick seems to put on weight that way and I like to see him a little heavy in the winter.