The squirrel's bedding was getting a little smelly, so I told Meg to get rid of his old stuff and replace it with some fresh batting. At first Scrat was NOT impressed. He made a huge production about trying to curl up in a ball on one of his shelves. Have you ever heard a squirrel sigh?

Oh yea, it was a BIG ta-do. Twisting, turning, sighing, curling this way and that and finally resorting to peeking out from under his tail with a very pathetic look on his face.

Apparently, throwing away ALL of his bedding was a little too much for him. I guess the problem was that nothing smelled like him.

Finally, I took pity on him and dug out the wreckage of his old bed and tucked that in and under the new batting. Oh my, that did the trick. Scrat got right to work rebuilding his nest. The batting had to be pulled apart, carefully kneaded into shape and then each ball tucked into place.

He must have worked long into the night, cause this morning, there was a very sleepy little squirrel tucked deeply into his fresh bed... 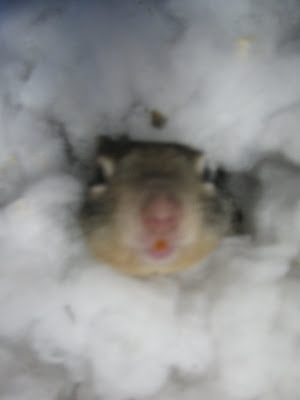 Posted by BrownEyed Cowgirl at 11:10 AM

He is soo adorable! I bet it was the smell thing, guess Scrat can't stay in a Squrrel hotel, gotta have his own stuff!

What a rotten little bugger! He had you trained there huh? Putting some of the old stuff in with the new? hehehe

If you ever need a scrat sitter, you know who to call! lol

Tell Meg her work rocks and to keep it up! There's all kinds of scholarship options for artists. I won all kinds of stuff way back when that helped pay for college. I'm super impressed with the border!

Awww...now I really miss Bomber. What a cutie Scrat is!

Too cute! They say that works with a new kitty litter box too! You are suppose to take a scoop of the old dirty litter and put it in with the new. Yuck! I know a lady who claims that if you leave a pile of poo at the back of the stall that is not their own it will encourage the next horse to poo in one spot! Hmm...

He is way tooooo stinkin cute!!! We had a squirrel we rescued as a pet at the elk ranch I use to live on he was adorable to they are just funny little creatures. Maybe I will get to meet him sometime:)

Whenever Bomber's toe-less tube sock got too...ripe, we would give him a new toe-less tube sock that he would fuss with until he was satisfied, then he would crawl into it and sleep.
Once I didn't have a sock ready to donate to him, so we gave him an old wash-cloth to use as a blanket. The next morning a VERY sleepy, red-eyed squirrel crawled out of a completely shredded washcloth/ball-of-lint and stared at us reproachfully. I cut the toe out of a new sock for him...
Bill

OMG that last pic w/Scrat peeking out of his new fluffy bed? ADORABLE!!

Scrat is just too cute! It doesn't surprise me about the scent thing for the new bed. Squirrels are funny creatures and they need it their way for sure. LOL

Together We Save said...