Hey, just like fugly I can now lay claim that my horse won a Top Five... 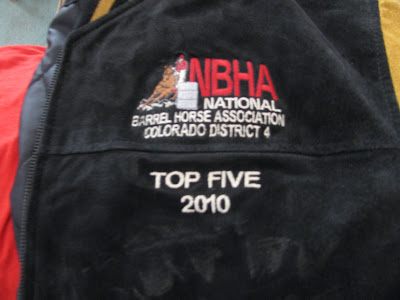 **If you didn't already know, one of the biggest jokes going on the internet is fugly's bragging that her buckskin stallion placed Top Five at the Buckskin World in the Jr. Trail.

That might be impressive if you didn't know that there were only 8 horses in the class and only 6 horses received scores. Fug's buckskin placed 5th out of 6. Good old fugs always forgets to tell people that part. LOL

So, I'll be honest...Moon placed 4th in the 4D for my NBHA district and won me a very nice leather jacket. Not nearly as impressive of a year as I had imagined it would be, but I was pleasantly surprised to find out that we placed anywhere considering we didn't run at all for most of the summer. So....Go Moon!

Now, I know everyone is dying to know...

We had two good runs this last weekend. Left all three barrels standing and Moon showed no inclination to dive into 2nd or 3rd. Our times were ridiculously slow though. Low 21's both runs. Ugghhh. That's little more than a lope for Moon.

As for the big question...

We did not run left these two trips. We ran to the right as normal.


I had a niggly little gut feeling on Friday night, which was a regular barrel race and therefore had exhibitions, that I should take Moon through the pattern a couple of times before competition, just to see how he would handle it.

I long-trotted through the pattern the first time (going to the left barrel first) and Moon did fine. I rolled right back around and loped the pattern. Moon tried. He went into the pockets really well and started his turns in good form and then he just kind of lost it and floundered out the backside of all three barrels. He hasn't figured out his footfalls all the way around the barrel yet.

I decided that it wasn't fair to Moon to ask him to run the pattern if he wasn't exactly sure about how to do it, so we went ahead and ran to the right barrel first. I'll finish out this year doing that and then go to work getting Moon practiced up going to the left barrel first. I still think changing will behoove him and hopefully make him more consistent.

I'm not dissing winning an award at all, especially since it is a really nice suede jacket...but it is really frustrating to still be in the 4D's when I know that Moon is at very least a winning 2D horse and actually should be a placing 1D horse.

I was hoping to have at least one video from this weekend, but Friday I was concentrating on what I needed to do and Saturday I came up early in the draw and didn't get my camera up to the crow's nest for the gal to video me. Hopefully next time. :-)
Posted by BrownEyed Cowgirl at 3:14 PM

Don't you regret lopping his balls off now? You have a top 5 horse! That there is breeding stock!

FOr all you went though with him , the success with the runs was a win . That said , you better knock em dead next year ! you got a rep to uphold . As far as Fugly ,and top 5 , I am holding back here as everything I try to type comes off as severely unladylike (apparently I am turning over a new leaf!snork)

So how soon before that crazy teenage daughter of yours tries to swipe the jacket? hehehe ;)

Give that big honkin horse an extra rub in his favorite spot from his Auntie Mrs Mom, and tell him he's a good man.

Nice job you two! We're cheering you on already for next season!!

winning something is better than nothing! Congrats to you and Moon and better luck next year on winning that 1D award!

Oh and thanks for the info on Fugs, I stopped reading there when we moved & haven't had the time to check up on what's going on in her world (oh how true that is, her world lol)

fern-no need to be 'ladylike' here. Let 'er all hang out. :o

MM-I'd guess about the first cold day we have. Heehee

Kristen-You are right. I like cheese with my whine.

Cdn-If you really want to know the 'scoop' on fugly's latest antics you have to read FHOTDReview (it's on my sidebar). Fugs would never allow a little thing like the truth get through her moderation these days. <:)

Being a big fish in a little pond is okay! Very nice jacket. Wear it with pride. Yay, Moon!

Yeah, I don't know what came over me. LOL
I see your piont about Moon though , knowing he is so much better than he gave you this year. I am prouder of Cat's 4th place (middle of the pack of 8 all a year older than her) than I am of the 2nd out of two , but really I could have sung out "Yay I got 2nd ,without ever mentioning the class size " Must remember to do that next year with Phoenix! Or I could just Declare him #1 and delete any one who argues?

Good for you kid! I haz a stallion too. He hazn't done anything yet. Well cept maybe knock up the kids pony. BYB at it's finest in my yard I'm telling you...
I am having nightmares about that head already please God let it be a haybelly.LOL

Nice jacket!! Aint to shabby if you ask me:)

You showed some patience by running him to the right again... thinking of the horse first, you were... get him going good at the left at home and then let her rip next year!!