It was a pretty exciting day around here. Turk got his shoes reset...Amazing. Absolutely amazing how much difference there is already (pics and post to come).

I scooped a used, but nice Sharon Camarillo barrel saddle for a little of nothing.

Bugzy Boy went to the trainer... 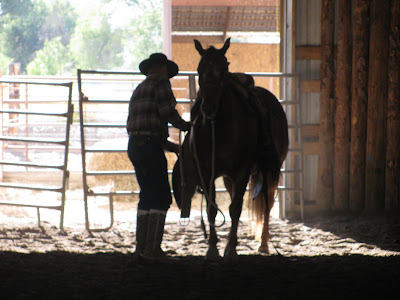 I have to say, I am impressed with this young man. I've had a couple people shake their heads when I said he is where I was taking some horses, but he is exactly what I want. I was not looking for a finish trainer. I was looking for a colt starter.

Once upon a time, I was just like this young man. I started colts. Now that I have 'graduated' to more of a finish trainer, I realize, after watching L work with Bugs that I have forgotten a lot of what I used to know. This is going to be a good refresher course for me too.

I thought Bugs handled things super well. It's way more difficult for horses to go from a female handler to a male handler than visa versa. I always hear women saying how their horse's 'don't like men', but it's very often a case of horses just aren't used to men. Men move differently than women and very often wear cowboy hats. You'd be surprised at how a horse can react to a stupid little thing like that. Even my horses look at me funny when I put on the cowboy hat.

Bugs worked very well for L though. L moved him around the arena just a couple of times and Bugs was quiet and attentive. L immediately moved to the saddle and that went fine. L moved Bugs around some more, did some flagging and then pulled out his rope.

That's where the hole showed up. Bugs was resistant to giving to the rope. So the lesson was all about working on that....


(In this vid clip-He wanted to Bugs to roll to the inside and Bugs wouldn't bring his shoulder in and move over to change direction. Even after he came around at the end, when L tried to walk up to him, Bugs wanted to leave.)

I think L handles his rope work exceptionally well. He has a good feel for the release of pressure. If Bugs was a more supple and giving horse, L would have probably climbed on him. It was pretty obvious Bugs wasn't going to 'do' anything. But...since Bugs has to really think about giving to pressure, L was wise to wait.

I completely understand. It's not a good feeling to climb on a horse, for the first time, when you know you aren't going to be able to bend them around and most likely have no Whoa.

The only thing I did tell L was that Bugs was genetically inclined to be one of those horses that likes to try to bull his way through things. It was a specific trait associated with those colts by our old Lady Bug's Moon stallion.

Bugs will obviously get softer with work, but most likely it will be something that will always have to be worked on, just like it is with Moon, who is Bug's 1/2 brother(same sire). Also, like Moon, Bugs is l.a.z.y! He may end up making a good reining horse, cause he sure does like to stop...Hahahahaha.

Another possible culprit for Bugs' lag at moving his shoulders could be due to his old injury. Bugs has a hoof injury similar to Turk's, but not as misshapen. I have been working on his feet as he is very inclined to grow a lot of heel. Dropping those heels down has made him a bit tender in the front. I know that by dropping those heels, it has caused pulling on the scar tissue around his heel, so I am uncertain if his hesitation is due to tender feet or if it is just going to take some time for that scar tissue to loosen. If necessary, I will take Bugs to the same farrier I take Turk to.

Overall, I'm pretty excited though. I think L will be on Bugs in short order.

L did make me laugh though, when he was done working the horse, he came over to unsaddle him and said, 'Well, at least you didn't lie when you said he wasn't a bucker'. Haahaa...I'm sure more than one person has brought him a horse and said, 'Oh he won't buck' and then the horse proceeds to give a full on rodeo bronc performance. No, having been in L's shoes, I wouldn't lie about something like that. A 10y/o restart is a tenuous project anyway. If I had not kept working with Bugs these last few years, even if I didn't ride him, I'm not sure he would be as good about things as he is, but then again, if he had shown any inclination to be rank, I wouldn't have wasted the time to keep working with him either.
Posted by BrownEyed Cowgirl at 4:12 AM

Looks like good work so far , I would trust your judgement on this guy . You know what you want from him for your horse and I think you will get exactly that

Bugs looks like he'll catch on, looking forward to hearing how he does...

Looks like a good fit for Bugs!
Good luck all o ya!

We have a horse at the farm I work for that is extremely tough. He cannot stand ropes around his back legs, he has kicked holes in our round pen, tried to kick people and just isn't getting it. This has been going on for a year now, and my boss has even thought of having him humanely euthanized, he says he will probably kill someone someday. But I always wonder what would happen if he was sent to a cowboy, a real cowboy....
Anyways, looks like you found someone that will whip Bugs right into shape!! Can't wait to hear more!

Oh I loved this post!! So cool to watch L work with Bugs!! I cannot wait to hear his progress!! It is really SO sad that people are not forthcoming with information such as "buckers"....So crazy!!

Paint Girl-Good idea for a post. There is a knack to rope working a horse and when done properly, I have yet to see a horse that refuses to stop kicking.

Habitual kickers like the one you just described can be reformed. They just keep doing it because they haven't figured out it's a BAD thing to do.

I'm still thinking about that saddle you got... dang girl!! I'm always looking for a deal like that :)
Bugs looks good! I think you've picked a fine trainer and things are going to go real good for all of you