It's Tough Being A Squirrel

"The Rat" never ceases to provide non-stop entertainment. He has been moved from the seclusion of Megan's room...seclusion...Haahaa..Yea right! We just got tired of going into her room to watch him. 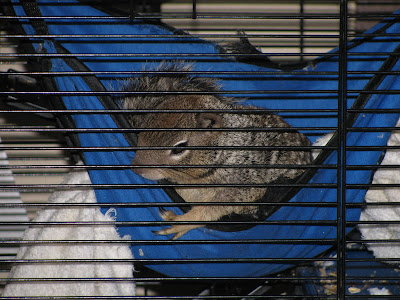 Well, that and I always felt bad when I would walk past her room and he would be hanging in his hammock staring toward the open door. As soon as he heard someone coming he would run to the edge and grab the bars of his cage. Looking much like a sad, lonely little prisoner.

Yea, and if you buy that routine, I got some ocean front property in Arizona-LOL.

I seriously doubt that any Rock Squirrel in history has been as spoiled as this one. He has trained Megan to dutifully go through his trail mixes and remove the items he has decided he does not care for. Have you ever heard of a squirrel that does not like corn?

I have succumbed to his preferences as well and have resorted to purchasing individual bags of his more favorite nuts and seeds.

NO ONE makes it past his cage with any sort of fresh fruit or produce without making sure to give him his 'share'. His favorites being bing cherries, watermelon and cantaloupe. Strawberries and raspberries are okay, but don't bother handing him a blueberry or blackberry. A couple of nibbles and he just throws it back at you.

Although almost everything he does is amusing, his nightly bedtime routine is absolutely hilarious.

Apparently he is worried that someone is going to steal his food during the night, so every night there is much ta-do made about making sure that his food is covered and properly tucked in...


When he is finally satisfied that positively nothing could dig his food out, he crawls into the rest of the towel that crosses through his hammock and makes a HUGE production of getting comfortable. He will keep at it...twisting, turning, fluffing and arranging his blankie until he is thoroughly frustrated, at which point he sighs repeatedly and resorts to hanging out the side of the hammock. Of course if he really finds it impossible to get comfortable he makes it abundantly clear that Megan is expected to tuck him in. Which she does. Finally happy, he curls into a ball, covers his face with his tail and goes to sleep.

Amazing how a rodent with a fluffy tail has managed to coerce 3 humans to cater to his every need.
Posted by BrownEyed Cowgirl at 12:09 AM

What a cutie! Don't know how long you have had him, but if it has been a short time, may I suggest checking him for fleas. The sad voice of experience...

Oh my goodness that is the cutest thing ever!

What a cutie! He looks like a lot of fun

We've had him since a he was a baby Leah and he has received several baths.

With the Bubonic Plague and the Hanta Virus both prevalent in this area, I made sure we got rid of the fleas. ;)

awwwww. Too cute!
Funny, my Flip dog does the same thing with her bed. Sometimes it's sounds like the house is about to fall down.

That is one lucky rodent!
LOL, word verf?
Feedim!

OMG, too funny how lucky you are to see that entertainment :) does he ever get to come out of his cage? does he bite? inquiring minds need to know

Angie-He comes out and sits on Meg's shoulders and eat treats. He also has a little game where he comes out runs up one arm, around the shoulders, down the other arm and back into his cage. That is about as comfortable as he is with coming out.

He does bite and violently if he doesn't like something. He refuses to be picked up or held.

I think he is about as socialized as most wild animals get. He's completely comfortable in his own space, appreciates human attention and is even a little affectionate toward Megan, but he is not and probably will never be like a domestic 'pet'.

they are so much fun we raised one from a baby until a stray cat got him
he was never in a cage was in and out of the house our cats did not bother him as they were used to him
He loved to jump on my sisters head and bury himself in her hair she had really thick hair and he loved it.
Enjoy they are a lot of fun never get mean.

Sounds like they have a true "Terrier personality" all in all how lucky you are to enjoy his charades :)

I admit I was skeptical, as I am not a fan of squirrels and usually call them tree rats, but that is totally cute! I caught myself going "Awwwwww!" when watching the video...

Too freakin' cute! Having that thing in the house would just blow Hawkys mind!!