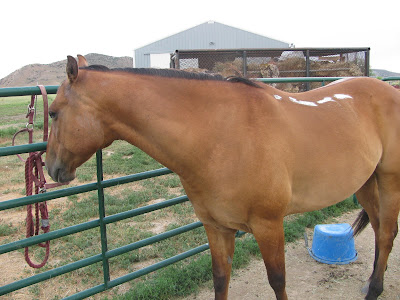 One of the horses got a good taste of Moon's back.

Unfortunately I only found this when I gave Moon a bath before we were headed to a barrel racing. I did not notice it when I caught horses up in the morning...

Probably because Moon and everyone else was covered in mud. The boys do like their mud baths-LOL. I leave the mud on unless I am going to ride because it helps against the nats. I have been lucky as I do not have a lot of flies, the mosquitoes are minimal(considering the irrigation), but the nats? OMG, they are terrible. I have been keeping Swat around every one's ears, under their eyes, on their sheaths and chests.

No way was I going to be able to run barrels on him last night and maybe not even this weekend. He had some swelling around the teeth scrapes and was very sensitive. I hosed him off for quite a while and covered his wounds with Crest toothpaste.

Did ya all know that one?

Crest, original formula toothpaste is a great scrape antiseptic and dressing. When it dries it forms a nice crusty cover, keeps the scrape clean, bugs off and helps the hair to grow back in quicker.

Anyway, I think Turk was the responsible party... 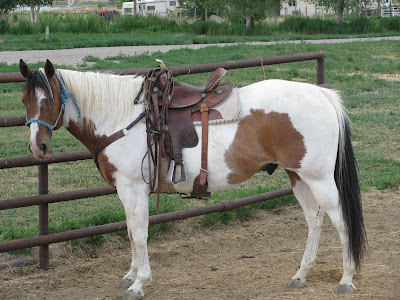 (LOL-Look how tiny my barrel saddle looks on him)

I thought Moon and Turk had come to an understanding, but apparently not. Guess I will not be turning those two together again.

I was disappointed not to get to run. I think I have my barrel horse back. The last few rides, Moon has been quite nice. We are back to being able to lope the pattern...bareback and with a halter. Moon is over his herky-jerky, charging into and around the barrels.

Oh well, it's not like I don't have others that need some time. Frosty can always use being 'camped on' and after watching Turk in the pasture for a few days and then the way he acts when I am leading or handling him and...

I think he actually needs to be rode some. Whenever I am leading or moving Turk around, he limps and walks soooooo slowly. Like it's a huge and painful effort to even put one foot in front of the other. When he is in the pasture however, he manages to move just fine. Barely a bobble.

So I saddled him up, got on and let him walk. Oh my heavens. He limped and hobbled along. But I decided I wasn't buying it. He had just loped the entire length of the pasture without a single break in stride. What the heck right?

Instead of just letting him hobble along, I picked him up into a working walk and started working on some slight bending and flexing. Just enough to encourage him to reach up under himself with his inside hind leg and to stretch his shoulders. Lo and behold...other than the occasional bobble, he started moving pretty decently.

I do believe that his bobbles are because he still has too much heel on his injured foot and it breaks over too quickly. We will continue to work on that. Mrs Mom has been a tremendous help.

Turk has just moved off of the injured/reserve list. He is not going to be able to handle hard riding until we get those feet more in line, but he will certainly benefit from bending/flexing, working on suppleness and getting him to use his back properly again. He's as stiff as a board. I can also feel him pushing into my left leg regardless of the direction we are traveling. I don't think he finds it very comfortable traveling with a straight body. Fifteen to 30 minutes a day of a working walk, a little trotting and working on suppleness will hopefully make a big difference.

Getting him right is not just about his feet. It's about his whole body. We'll just keep working on it and hopefully have something in the end.
Posted by BrownEyed Cowgirl at 7:00 AM

geeze moon did get his hide branded didn't he?

Too bad about Moon, I knew you could use Crest for ringworm ,but I didn't know it would help with scrapes like Moon's. That turk is a big boy!

Dude- learn something new everyday. We use Listerene for a LOT of stuff- never thought about Crest! Coolness...

Turk--- Amen. It isn't just about one section of the horse or another- the WHOLE PACKAGE has to be able to work. All of it. Get the feet right, and it will be easier to get the rest of him in line. SO glad to see I'm not the "only one" out here thinking like this.

Smooch that big booger from me, and rub Moon. Oh- hey-- is it my imagination, or is Moon trying to get in his winter base coat fuzzies????

very interesting about the Crest! I had never heard that one but will definitely try it!

Poor Moon. He got nailed :( Takes a while for that to quit hurting too. Guess Turk gets to do the work now :)

Thanks for the Crest tip. Jaz is always wounded in one place or another.

Boys, they play so rough!

This is what I like most about blogging- learning all these little tips. Thanks! Hope he heals quickly.

Yes...toothpaste works wonders!!! : )
Too bad about Moon though.

Thanks for your advice on Waska. I am also leaning towards a systemic imbalance of some sort, and I will have Amber (or I will) call that number. I will keep you updated. :)