Sometimes This Is How It Is

As some of you may remember, last November when I went to get Miss Beretta, I found that she had developed "lumpy joints"... 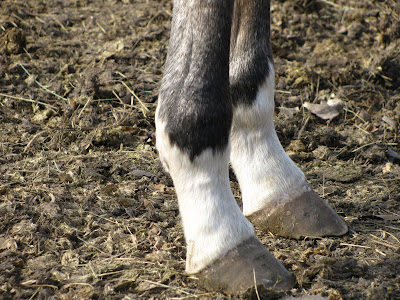 Well as soon as I got her here to Colorado, I put her on a grass hay diet and started feeding her supplements to combat those lumpy joints.

About a month into her being here, I noticed that her joints looked even larger and she had a front leg starting to bow. I immediately called mom and asked her if I should start feeding her MORE of the supplements. Mom didn't think so and asked me about her hay? There is only two choices for hay in the immediate area here, alfalfa and brome. I supposed that if I needed too, I could drive about 90 miles and find some native mountain meadow hay, but neither of us thought that the brome hay should be causing any problems.

Well, one day, the BO and I happened to be visiting in front of Beretta's stall and he asked me if I liked my filly.

I do like Beretta. I don't have the heart-to-heart connection with her that I do with Shooter. But he's kind of a special boy(..and he KNOWS it), so it's really impossible to compare the two. It's like apples and oranges.

So I simply told the BO what I thought. Yes, I do like her. But there are a few little things I won't really know until she grows up. And I pointed out that I was concerned about her legs. I really thought the grass hay and the supplements would be making a difference in those joints. That's when the BO told me he wasn't feeding her grass hay, he was feeding her alfalfa. Uber-rich alfalfa!

I put a stop to that, that very day.

Now, bless my BO's heart. He had the absolute best intentions. There is not a horse on the place that can cry hunger. And I really think that he thought we fed Shooter some kind of a super, special diet for him to look like he does at his age. I'm sure he didn't want me to feel like my little girl was getting slighted.

So I explained to him that a young horse, particularly one with Beretta's condition does much better on a grass hay diet and also that I was feeding her a supplement specifically designed to be fed with grass hay.

I'm sure that I caught it in time, but a month ago Beretta's front legs weren't looking so hot... 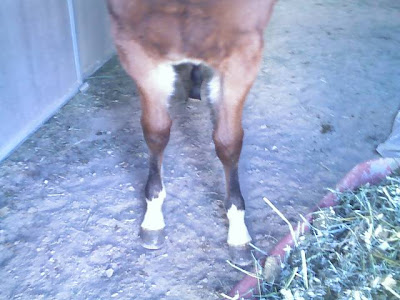 She was very splayed out in front and her right front cannon bone was starting to turn. The splaying was not due to possible foundering, the poor little girl was just getting too heavy. She is not the long and lean model, like Shooter. She is very much her mother's daughter-thick and stocky. Besides the alfalfa giving her too much calcium, which is very bad for unstable joints, it was packing the pounds on the poor kid.

It's been a month now, of definitely being on a grass hay diet and Beretta has lost a few of those extra pounds, she's not splaying anymore and her right front cannon bone looks pretty normal again. The bow in that leg is gone. We still have lumpy joints, particularly on her right rear. That leg also has a few bumps on the back of the cannon bone. But she is coming around. And I got her feet trimmed. It's going to take a few trims to get them "right", but I got those underslung heels nipped off and leveled her out. Getting her angles right is going to do a lot to relieve the stress on those pastern joints. (Sorry Mrs Mom-I was going to get before and after pics...It all went a little too smoothly and I was done before I knew it.)

I have also ordered some Basic Mineral, another Lampley product that has Diatamatious Earth in it. It is an excellent source of trace minerals, that I have found has really helped the horses we have fed it too.

It's going to still take several months to get Beretta's joints strengthened up and straightened out. Heck, it could take all of her yearling year to get her right, but we will get there.

And that is sometimes how things go when raising horses. Sometimes you are lucky and everything is fine and goes smoothly and sometimes you have to work a little extra hard. But ya know, in the process, I have become quite fond of Miss Beretta. She is a super, sweet little girl. She'll have to grow up before I can decide if I want more like her. But all in all...I'm pretty darn happy with the one I do have.

And my BO? Well, he listened and he watched. Guess what he is feeding his yearling now?

Glad to hear you caught what was really going on... that could have been a sad mistake on his part. At least you know he has good intentions AND is willing to listen and learn.

Sometimes the best intentions don't always have the best consequences! Good thing you are knowledgeable enough to catch that! I would have literally no idea what would be causing that sort of thing (I do now though!)...

Also good that the barn owner is willing to listen and try different things.

What causes the lumpy joints that you were mentioning? Is it just part of a foal growing?

Good thing you caught it.
We have always fed alfalfa hay, always having cows up until a few years ago. If fed right (and knowing the analysis of the hay EVERY year) we haven't had a crooked leg yet.

Laura-All foals leg joints look a little lumpy-because they are "open"-have space in between the joints for growth. But abnormally lumpy joints are not normal for the vast majority of foals.

The reasons why can stem from a variety of reasons-genetic, nutritional(too much, too little or unbalanced diets), having to walk too much at an early age or too little exercise and growing too fast are just a few.

Most commonly they show up in foals from maiden mares, aged mares, obese mares or starved mares. It's pretty easily managed in aged mares during the gestation period by providing the extra nutrients they need. Maiden mares are a crap-shoot. They just don't always know how to put what is needed into their first baby. Obese mare's bodies hog the nutrients and starved mares bodies don't have enough nutrients to give.

Sheez-There is almost never a cut and dried answer with horses is there?

But most vets have concluded that the best course of action is a low-growth diet(good grass hay), very little grain, a balancing supplement, exercise in moderation and keeping the feet balanced and the angles correct.

Sydney-The alfalfa doesn't cause crooked legs or lumpy joints, but if the issue is there, it will exacerbate it. Lots and lots of horses are raised on alfalfa and do just fine.

Shooter was fed quite a bit of alfalfa his first winter as his mother needed the extra oomph and he did just fine.

Once Beretta's system gets balanced out and after she matures a bit, I see no reason why she shouldn't be able to eat alfalfa again. It just doesn't work for her right now.:)

I'm really impressed with how knowledgable you are. You know a lot about nutrition and raising horses and I always feel like I learn something here. Glad you got the problem sorted out. Just curious...what are the lumps? How does the excess calcium contribute?

I want to see the pictures in the Spring.
I switched everyone here to a solely forage diet.
Because there was one family member who challenged me on why the babies couldn't have 16lbs. of grain a day.
Because they were hungry and He just knew it. Had my kids heading over at the knee and that was not working for me.
The grains are now for the poultry.lol

Michelle-It's been trial and unfortunately error at times.

Your questions have surprisingly complex answers and if you start asking people, you'll get a lot of different opinions on the subject.

The lumps are technically "bone", or I should say, misapplied minerals, primarily calcium and phosphorous that are trying to become bone.

My personal belief is that bone quality starts during gestation. If for some reason the mare does not supply the necessary nutrients to the developing foal, they end up with a poorer quality bone, that has difficulty absorbing nutrients once they are self-sufficient. This is why the lumps often appear about the time the quality of the mare's milk starts to deteriorate. *If they start appearing well after a foal has been weaned, it is most likely a case of a poor calcium/phosporous and mineral ratio in the feeding program.

But bone quality can be improved and the excess minerals in those lumps can be re-distributed if the young horse receives the correct calcium/phosphorous ratio(1.2/1:1) as well as the extra minerals they need to start building bone density.

The reason that grass hay is recommended is that it is naturally(usually) within the acceptable ratio. Alfalfa is very high in calcium and would require a cereal grain(for phosphorous) to offset that. Of course, then you are pumping the young horse full of high powered feed that is most likely going to make them grow. It's hard for their bodies to do both things at once. Since growing is easier than building bone density, you are still going to miss out on what you really want to happen.

Calcium can be a tricky mineral. If everything is in balance and the bone is absorbing it, it is absolutely essential for strengthening the bones. If it is not being absorbed properly, it has a nasty tendency to start adhering to "weak" spots on the bone, particularly in areas of poor circulation.

Too much of a good thing,huh. Is alfalfa more expensive?
Misguided best of intentions, and the horse's legs..
Thank goodness you checked!

Its like you read my mind BEC! Saw your comment over at my blog... too funny because I'd sent you an e-mail about Lampleys but it got bounced back.
A while ago I did a search for it but all the links weren't valid. So I was wondering where you could buy it? Also do you know where there is more info on it? Like what products there are and which are good for what.
thx

That is so great that you got that figured out!! Your right it is one tricky science feeding these monsters LOL! I have 2 weanlings (1 month apart in age) right now and they have been fed the same but one mare being a maiden mare and her filly looks like a pygmy pony...Well that's the best description I can give of her anyways!! I cannot figure this girl out! I swear she hasn't grown but a few inches since she was born and my colt that is a month younger just puts her to shame!! UGHH! They can be so mind boggling!

I learn something new every day, and this was it today. Thanks.

I am glad you caught it! She is going to end up a nice big horse! Good thing she has you watching out for her!! And yes, Shooter is one special boy!! One super nice handsome boy! :)

Happy New Year to ya!