Roan Dog and I had a come-to-jesus meeting today! I am now jesus and he has his front feet trimmed... 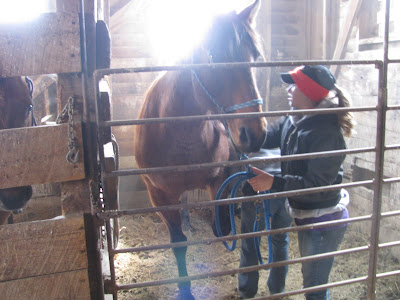 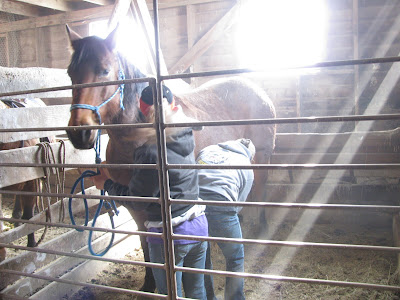 I couldn't have gotten it done without Megan's assistance. Mom had no interest in getting in that stall with the roan horse. I needed someone up there to keep him from biting me in the booty. He decided if he couldn't get away, he was gonna take it out on my backside. Once we had him in position, he was actually pretty decent about it. I knew most of the pulling away was his way of saying nanner-nanner-boo-boo-I-can-take-my-foot-any-time-I-want.

You have to admit though, that for a horse that has not had his front feet trimmed in FOUR years, he didn't look all that bad(hoof on left side of picture is not trimmed, hoof on right side is trimmed)... 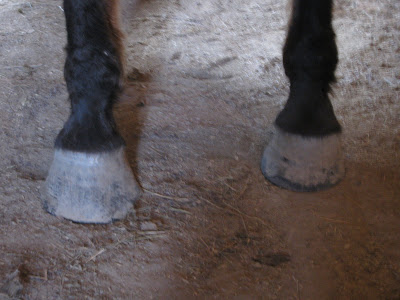 He toes in a bit. I should have that fixed within a few months. It's mostly flare. I have to say, I wasn't much interested in "pretty" today...just finally getting to this point was a milestone.

He wasn't too sure what to think about all that after we finished... 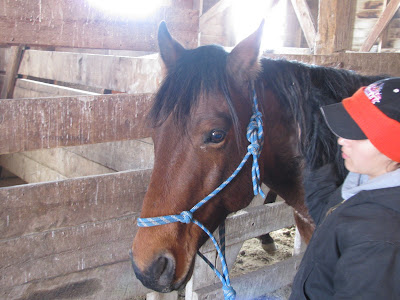 I stopped and set his foot down quite a few times. A nip or two-set foot down. Pet, pet, good boy, had Megan stick her finger in the corner of his mouth to make him lick, his eyes would soften up and he would breath and then we would go a couple more nips.

I wished I could say Ta-Daaaa...he is fixed. But, he is not. This will be on going process for quite some time. He is a stubborn bugger. But he never got radical or acted like he wanted to freak out, so all I can say is we won this skirmish, without loss of life or limb.;)

Posted by BrownEyed Cowgirl at 8:00 PM

Good job! I like the way you took your time and made sure the pony was alright with what you were doing. It shouldnt be so traumatizing for him next time.

Whew! Sounds like you had some success. I'm glad Megan was able to help. Hopefully, he'll get better every time!

Good Job! We had a horse come to us from your neck of the woods.
Took 9 months to get him quiet and solid about having his feet handled.
Gets his shoes burned on now. No problem.
He kicked the crap out of our farrier many times. Before he got right.

The last time he was here he lost his balance banged into Gato's hindquarter, bounced off into the barn wall, and back again.
Had this look on his face like he thought his life was over.
It was funny "After".LOL

Was your horse run wild until breaking time like our's?

No Dena-We raised RD. Up until a few years ago, he was a respectable citizen. He got to bucking people off, at first due to some physical issues and then just because he would lock up mentally and bucking became the easiest thing to do. My brother sent him with a friend and the horse came back in worse shape mentally than when he left, my brother just turned him out to pasture.

I'm really not sure why this horse got this bad about his front feet. He was trimmed and shod regularly most of his life. But it seems to be tied into why he blows up. It's just really uncommon to run into a horse that is perfectly fine with having his hind feet handled and trimmed and then to be so freaked out about his front legs.

Wow that is an interesting story...It makes you wonder if maybe something in the pasture nipped one of his front legs maybe?? I know with one of our geldings he doesn't mind dogs but when he see's a Heeler he goes nuts!! We asked the old owner and he said yep sure enough he had a Heeler that he caught nipping the horses legs and so needless to say the dog found a new home... Well congrats on the progress you made today!! It's a big feat in something like this!!

That is quite an achievement. I hope he will put it together in his RD brain and improve over time. It is very peculiar for this to crop up after years of no problem.

High 5 to Megan for helping out too. Always gotta LOVE a good handler!!! They are worth their weight in GOLD IMO.

Too bad he's had a bad experience or something that triggers the behavior. Kudos to you for having patience and love for this guy when so others would just give up....even if could mean a nip in the booty or facing a blow up! Their memories are amazing be it positive or negative. My hat off to you....cowboy hat, that is! LOL!

BEC
How old a horse is he?

He's either 11 or 12. I think 12.
He was a share colt(my brother traded stud fees for a share of another guy's foal crop), so came to us as a weanling. He didn't get started until he was 4-rode pretty good. His 5y/o year my brother went to using him and the horse got to bucking. Took him to the vet and he did some skin surgery on his back. Gave him the rest of that year off. They started back on him his 6y/o year-he was "okay" but you had to watch him. His 7y/o year he got my brother bucked off and then enother guy. My brother sent him to a friend, cause this guy said he didn't care that he bucked. He sent him home-said he didn't have time to ride him(I think RD probably bucked him off a few times). And he was turned out.

The horse has never been "abused", I just think that they used methods that were inappropriate for this particular horse.
He's a peculiar mix of timidness and belligerance. He has learned to be defensive and it takes a lot of work to keep him from shutting down mentally when you are working with him. He was kinda dangerous when I first started working with him, but I don't consider him dangerous anymore-he's actually very predictable.

Richard has a horse with trimming issues. I'm thinking I might just take him on if I can ever get a spare minute or two. LOL OK, so I need a few spare days but you get the picture.

Here's to patience and persistance! (with a dose of safety thrown in!)

Wow, girl, he really wasn't too bad considering it had been so long ago!! LOL!! Thank goodness for your helper, Megan!! You did a great job trimming! I wouldn't want to see what I would have done. :) Roan boy does look a bit confused by it all. hee hee

You go girls! Way to go, little baby steps, you'll get there!