The Daughters Of Joe Hancock...

I think one of the reasons I find the Hancock horses so interesting is the strong opinions people have of them. Some sixty years after the death of the horse that started it all, they are a prevalent and potent bloodline that overall has not changed much, in looks or athletic ability. Joe Hancock was a freak of nature, much like his grandsire, Peter McCue.

When it comes to the temperment of the Joe Hancocks, a lot of things come into play. Joe himself was said to be quite the gentleman. There is nothing written or retold that indicates he posessed a rank attitude or a tendency to buck. In his get, a few indicators start to pop up that some of them might have the inclination. But a person has to take into consideration WHAT Joe was bred to during his breeding life at the Four Sixes Ranch in Texas.

Of the 155 registered get of Joe Hancock, nearly all of them were out of mares of Unknown parentage. Most likely these mares were mixes of mustang-type, TB and Morgan horses as much of that area used Army remount stallions to improve the local stock. Few ranches rode their mares at this time, so broodmares were often selected based soley on having riding-type conformation. Kind temperments and tractability just weren't real high on the list of considerations. This double dose of "cold-blood" probably brought out some traits in the resulting cross that might not have shown up if Joe had been selectively bred to pedigreed mares.

In spite of this fact, it seems that every Hancock that got the chance, proved it's capabilities. Stallions and geldings became sought after in the rodeo arena and the mares produced more consistently good using horses. It didn't really seem to matter what they were bred to either.

One of the chief complaints is that all Hancocks these days seem to be in-bred and line-bred...a huge mish-mosh of nothing but big, coarse horses that all go back to Joe Hancock. A lot of this can be contributed to one family(of people) who rodeoed to win and when they looked around what they saw people winning on was Joe Hancock horses.

But Joe Hancock did not have to be in-bred or even linebred to leave an effective mark in the race or performance horse world...or even the halter world for that matter. Quite frankly, a little of Joe went a long way. And that is most remarkably seen by the impact that his mares have made, even in modern families. The problem is we seldom recognize it, because these horses are not roan, not rank and certainly not ugly. 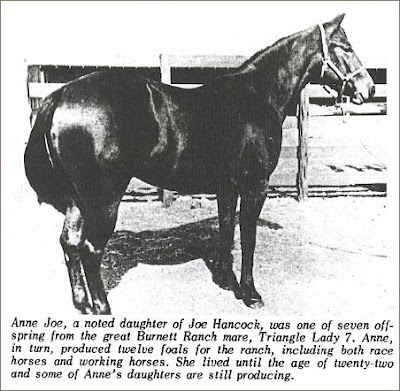 Another noted daughter of Joe Hancock was Joan... 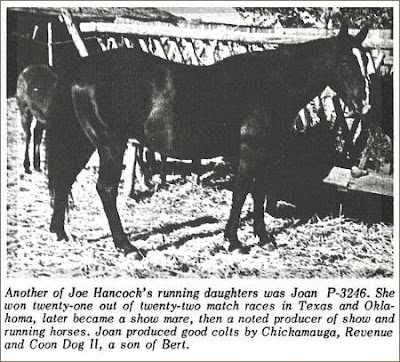 Joan(pronounced JoAnn) was owned by Walter Merrick and produced the likes of Hot Heels(X Midnight Jr). Hot Heels gave us Bar Heels and Bob's Folly, full brothers by Three Bars. She also gave us Johnny Do It and Mona Leta, a full brother/sister duo by Leo. As well as Mary Sunshine by Top Deck. All were reknowned race horses of their time, running AAA or AAA+. 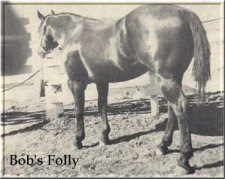 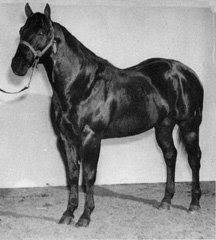 Steel Bars did run AA on the tracks but was bought from Walter Merrick specifically to become a halter horse. He won the 1957 Hi-Point Halter Stallion Award(the equivalent of today's World Championship). His son, Aledo Bar turned right around and won the Award in 1959. Steel Bars is still found in many modern halter and performance bloodlines... 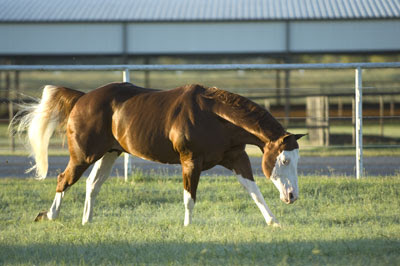 I didn't want to make each post too long, so I still have to tell you about MY favorite Joe Hancock daughter...her impact is felt in spades in the barrel horse industry!!
Posted by BrownEyed Cowgirl at 4:00 PM

My trainer had a mare that was Hancock bred and she was the sweetest, nicest mare so I never understood why people trashed the Hancock line so much. Thanks for shedding a little light on the subject!

I drive past McQuay twice a day and am always tickled when I catch a glimpse of Gunner. Same thing when Hollywood Dun It was still alive.


Come to think of it, no wonder my dream of having a horse wouldn't die. How could it when I'm smack in the middle of some of the finest horseflesh on the planet!

Hey Leah, My good friends from college were assistant trainers for McQuay!! I am jealous you live right in the middle of all that!

I have a brother in law that would give his right arm for a Hancock horse. In Utah there are a lot of them. A lot of paint horses that go back to Hancock. I have known them to be nice working horses, rope, cow, and such. They always always have nice bone!!! :)

Leah-I wanted to apprentice under Tim McQuay soooo bad when I was in Equine college. He was booked up, so the next reiner was Al Dunning. At the last minute he had to be gone for an extended period, so I got stuck with going to a halter and pleasure horse trainer in KS. Blakkkk! I wanted nothing to do with halter horses and was not especially thrilled about the pleasure horses. But I did end up learning a lot that has behooved me over the years. Stilll...I always felt I missed out by not getting to apprentice with a reining horse trainer.

Andrea-Are Hancocks not common down there? They are like shooting fish in a barrel around here.:)

I didn't know about the mares Hancock was bred too. That is really interesting that most were just a mix...and explains some about my Mustang:

I happen to have my hands on two horses with "a Little' Hancock in them - and I LOVE them! My Cowen and Doc Bar/Sunfrost colt has some and surprisingly enough, my mustang's sire was of Hancock decent (Her mom was pregnant as part of the breeding program that released QH studs into the herds to get rid of some of the inbreeding). Both are extremely well built, have fantastic conformation, and have a ton of heart!

Thanks for all the info on this Line. I knew a little before, but have been researching some more on my own based off of what you have posted! Thanks!

Interesting stuff here! Thanks again! Have the Triangle Lady 7 line too.