I don't have to look very far to see who Shooter reminds me of... 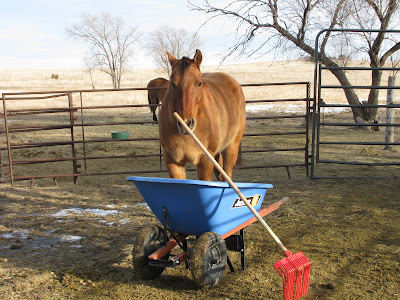 Moon is Shooter's big brother and they resemble each other in a lot of ways. Namely, they both like to be in your business. The biggest difference is Shooter is a genuinely friendly colt. Moon....ummmm...Moon is uhhhh...Well, Moon is different than any other horse we have!!

I raised Moon much the same way that Shooter is getting raised. He was imprinted. He was gentle. He had regular human contact. Moon never appreciated any of it. His favorite trick was to bite me at feeding time. Believe me...I worked tirelessly to break him of the habit...he was just a dirty, little sneek. I resorted to buying feeders that hung on the fence and dumping the feed over the top. He would still try to get a nip in. I was really happy when he outgrew that!! When it came time to trim his feet...Ohhhhh...I was so proud! Here I had a weanling that was halterbroke, led and I could clean out his feet. Trimming should be a breeze right? NOPE...Moon decided the best way to avoid having his feet trimmed was to stand on my brother's head. When that didn't work, he decided to try flipping himself over backwards. Mad...OMG...I had never seen a colt so mad! My brother fixed his little wagon though. We put him in a stall. My 6'2", 200lb brother pushed him over against the wall and proceeded to trim one front foot. We turned him around and brother pushed him against the wall, went to pick up the other front foot and Moon managed to climb the wall...and then flip himself over. Needless to say, he got his other three feet trimmed while he laid on his back.

Isn't he special looking sporting his new lime green halter?(Megan got it for me for Christmas)... 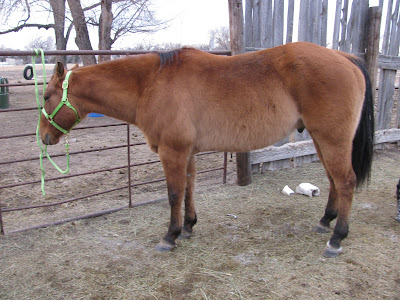 It took a few years. Lots of cussing...a few thumps in the belly along the way, but by the time he was 3y/o he wasn't too bad. The last time I ever had any problems with him was when he decided that standing on me while I was trimming his feet was a neat trick. I promptly tied his front leg up and let him stand like that for a bit. When he was quiet, I proceeded to trim his foot while it was tied up. It was not a pretty trimming job...but he learned that trying to lay on me wasn't going to work and he couldn't stand on me either. After that-never a problem.One thing about Moon...he is smart. Smart like a coyote...if he thinks he can get away with anything...HE WILL! 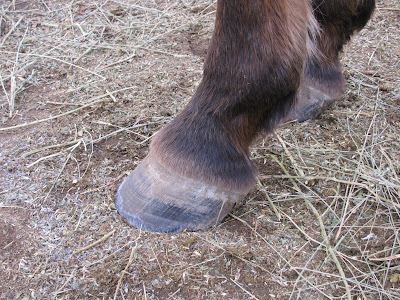 Thankfully, he wasn't as belligerent about other things. From the first time I ever tried to clip him, he was fine about it. Broke out without a single hump, jump or spook. He was fairly unimpressive for quite a few years. The first time anyone besides me ever said the liked him was the guy that rode him in the feedlot for me. He tried to buy him. A team roper in AZ tracked a few steers on him. He tried to buy him. I let another heeler start him out of the box for me and he tried to buy him. Everything he does is like old hat to him. When I started him on barrels, I told my mom I thought he was promising...she was like oh yea...ummmm-hmmm. Then she saw him run. Suddenly, she thought he just might make something. It's kinda cool really...he was just a horse and not a particularly noticable horse, until you did something on him or watched him work. All of the sudden you wonder why you didn't notice him before. And how about this? Moon will be 11 this June and I think he is finally maturing! He sure looks different to me...bigger, thicker...fuller in the hip...for the first time in his life, he seems to have some presence about him...talk about a late bloomer-LOL. I am really looking forward to this year...Megan is going to run him in barrels at the HS rodeos. I am hoping we can get to a friend of ours so she can practice some break-a-way on him too. But Moon has become my horse...just like his mother was and I hope Shooter will be in the future.

How about this to end the day? 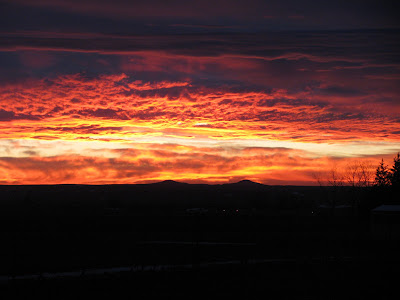 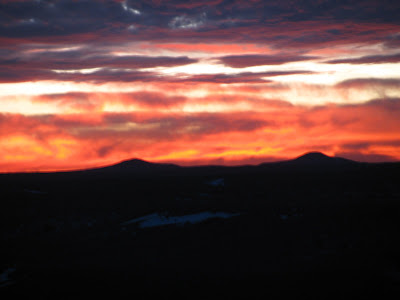 I know, it's not like other places don't get sunsets...but they just seem so spectacular here!! Doesn't that second picture look like a watercolor?

Posted by BrownEyed Cowgirl at 2:00 PM

Isn't it funny how we end up with certain horses?? Moon sounds like he is quite the character! Are you sure there is no Arab blood in there somewhere?? LOL!!! I can't wait to see where he takes you and Megan this summer, and I agree...he is very handsome! :)

PS-I saw your comment on AOHCM about Def Leppard vs. Poison, and I can't believe that I mixed them up!!! I knew that DL sang that song, but for some reason I was thinking it was Poison. See?? I told you I have blonde moments...lol!!!

Enjoy those with such personalities. As ornery as they seem, it can be endearing! (Just not at the time!) Love the stories.

I am usually up before sunrise and my office is on the east side of the house. I have a file of pictures called "sunrises" that I see coming up as I'm reading my email & sipping coffee. Everyone is different, some not picture-worthy, but others I want to share with the world. Enjoy seeing your sunsets.

it so nice to know that other people appreciate things like sunsets, sunrises, full moons and the like... I am always so surprised when I say... "did you see that sunset tonite" and people give me this blank look as if to say, "you mean the sun has gone down?" you're pics were stunning....

He sounds like he's working out for you and what beautiful photos!

Shooter and Moon sound like unforgettable personalities. Those antics! I'm glad you have hung onto Moon through all those offers. Gorgeous sunset - like the whole sky is coming down in flames. What a beautiful world we live in.

It is funny how some horses are like that. I guess a lot of the greats were like that too- Royal Blue Boon, Seabuiscut, Doc OLena. Not to say that he is not a nice looking gelding but I have always loved the expression, "Beauty is as beauty does." I love a horse that can suprise you. I went to see a mare once that I didnt like the look of at all but the lady convinced me to go out for a ride on her and OMG I LOVED that horse (she ended up being in foal which didnt work for me). And then I went to see another horse that was drop dead gorgeous and I was soooo excited to take her out but ended up HATING her even though she did nothing really wrong. Horses are weird like that.

Moon does sound like a little stinker!! And we have a 10 year that this year I think just finished filling out. Some horses do just take a bit longer. To get the width and all.

And your sunset is beautiful. I love those clouds!!

oooooh, that's a pretty sunset! Gorgeous! And Moon too of course! He is a wonderful horse and you're blessed to have him and I know he'll kick some serious butt this summer.

I've been enjoying your posts--new to the blog scene--check me out!
Loved the sunset!
--Mindy

I love how different horses are. How boring would it be if they were all the same??

Stretch is always trying to get into my business as well, but in a friendly way - always poking around what I am doing almost as if to say, "Mom can help?"

At a show when I am scrambling to get them both in the ring sometimes I feel like yelling "NO You can't help so leave me the heck alone!!" But I don't, I usually end up laughing...what can else can you do with a heart like that?

Love the first photo...can if you could train them to do their own mucking. HA!

Isn't it funny how full siblings can be so different. Moon sounds like quite a character. Aren't those always the ones we tend to like. LOL