Where Was I At?

I really don't know how a month has passed by since I last posted. It sure doesn't feel like it. The days just go by so fast here in Arizona. LOL

Let's see...Just a couple of recaps from the last month...

Scamper and Rock are home!! 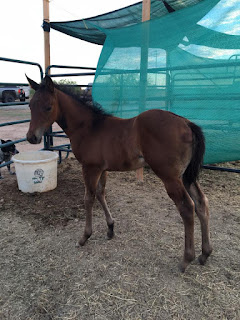 It didn't take Rock long...just a couple of days, and he got over his 'You can't touch me' attitude and has become as friendly as my other colts have been. He's a little different though. I have to watch him. Not only is he prone to snapping, he has jumped up and tried to strike me a few times. He has a very Thoroughbredy temperament.

He is getting better though. I think some of it was just from being cooped up in a 16x16 stall for a month. Now that he has room to run and play, coupled with firm dissuasion of those kinds of antics, the edge is coming off of him.

I am just so thrilled with how he is made though. I was just praying that when crossed with a superior stallion, that Scamper's genetics would shine. I think Rock is going to be spectacular.

Right now, he looks very small and kind of dainty in comparison to Sneaky... 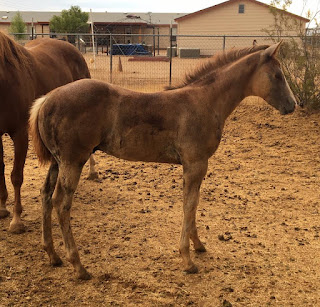 But I mean, pretty much anything looks 'dainty' compared to Sneaks...

I thought Ruger was a big, stand-up colt at this age, but Sneaky has him beat. I was comparing pictures of Ruger and Sneaky at the same age and Ruger was almost 5 months old before he really started beefing up. Sneaky is just a little over 3 months. He's going to be a powerhouse.

I knew I was going to have to actually list Sneaky for sale come weaning time. I HAVE to get my numbers down. Including the 2 foals, I am up to 10 head of boys. That is way more than I can handle, so it is time to start thinning the herd. As fate would have it, one of my friends from back in CO asked me if Sneaky was for sale, so I priced him and she snapped him up.

I was a little in shock for a couple of days. I mean, I have had a lot of interest in this colt from early on, but still, I put a healthy enough price tag on him that I thought I would have to list him for awhile and then do some dealing on the price to get him sold.

He's going to a good home too and that means the world to me. This gal knows how to raise babies, they get broke, they use them on the ranch and then she runs barrels on them. Very seldom does she sell a horse and it's never for nothing. Sneaky is going to have a very happy and useful life.

Sneak will be here for another couple of months. With Beretta not being bred back, there is no reason to wean him before he is at least a full 4 months old, probably closer to 5 months. I'll get him halter-broke and weaned and then haul him back to CO.

The abruptness of the sale shocked me a little, but man is it a relief. That means that this Fall I only have to concentrate on getting the Canadian horse and the big bay horse sold.

The Canadian horse is doing good. At first I just spend time riding him out in the desert, but now that he is in better shape, I have been working on livening up his handle. He has had good training. He knows how to do what I am asking. He's just L.A.Z.Y!!! It took a lot of popping him on the shoulders and hips to get him to decide to liven up and start moving his feet with any speed or lightness, but it's coming. He has gears he didn't even realize he had. LOL. I think at this point I need to get him shod though. He's not really tenderfooted...but I can feel that maybe part of the reason he doesn't want to move his front feet real fast is because he's hesitant. That usually means there is some tenderness/pain associated with having to hustle his feet. There aren't many horses that can stay barefoot very long in Arizona, if they are ridden on the native terrain very much. The soil here is hard on feet. It exacerbates how a horse normally wears their feet. In this horse's case, he has a tendency to land hard on his heel on the fronts and stub his toes in the back, resulting worn down heels and belling toes in the front and no toe and lots of heel in the rear. If I trim him to where he needs to be, he gets sore, so shoes it will be.

I've had people interested in this horse. The one gal that really wants him, I don't think he is something she will enjoy for very long. She has a background in hunter/jumpers and cutting horses, but has been away from the horse world for quite awhile. She thinks she needs a nice, gentle horse like this one to get back into the swing of things and I think she will be bored with him in 30-60 days. I've had a couple beginners ask me if he is suitable for them and while I think, in a lot of ways he would be perfect for a beginner (he sure isn't going to hurt anyone on purpose), unless they have a trainer or someone with experience to keep him tuned up...again...going to be sorely disappointed in 30-60 days because he'll just stop working altogether if they don't know how to get it out of him. I'm really thinking my best bet will be this Fall when the sorting start back up and I can take him to some of those, or when the trail riders start back up. He'd be a nice trail horse for someone who likes to just poke along. It remains to be seen whether he has enough speed to catch a cow, but we'll start rope practice one the weather cools down and the roping cattle come back.

Jet has really been my big 'What the hell do I do with this horse?'. There is just no way he is going to work for my brother. Decided not to even go that route. Someone would have just gotten hurt and the horse would have been ruined. I was literally at the point where I thought I would just have to put the horse down. It sounds harsh, but I have some super-duper young stock here that is NOT going get put on the back burner while I mess around with these odds and ends that aren't going to make barrel horses. But then I thought, 'Well, maybe I'll just go straight English with him'. I mean, those English people are used to dealing with flighty TB-types and his size, color and build is perfect. Even his age is not much of a hinderance for the English crowd. So, I am preparing Jet for an English show in September. He rides well enough that it is mostly just going on with him. I'm working on his showmanship and flatwork skills and will progress to crossrails with him soon. He's doing quite well now that I actually have a focus for him.

The only other horse I have on my 'for sale' list is Flashy, but that won't be until next year. He'll sell better as a well-broke 4y/o than he would now (even if he was riding). He needs to go to a roper/steer wrestler and those people prefer them with some age on them so they are ready to go into training and then to work when they are 5 or so.


Posted by BrownEyed Cowgirl at 5:08 AM

Sounds like you have some good plans in place- and congrats on getting Sneaky sold so quickly!

Holy smokes does Sneaky ever have BOOTY!