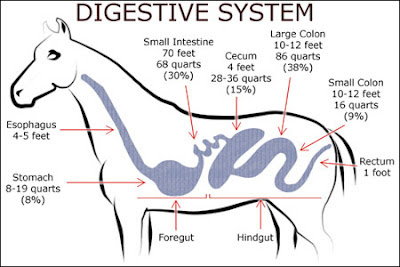 Actual treatment of the two types of ulcers is vastly different, although it is generally accepted that for the most part, certain changes in feeding programs and living accommodations can greatly reduce and possibly eliminate both types of ulcers without any actual treatment. Of course, common sense says that if your horse is already on the kind of diet that is supposed to be the most effective to help prevent ulcers, has a relatively stress-free lifestyle and there is still a problem or you have a horse with G.I. tract problems that are causing real discomfort...You need to address them.
Gastric ulcers are the easiest to actually diagnose, if you are willing to spend the money on an endoscopy. But...(there is always a 'but' right?)...A horse must not be fed for 12 hours prior to, nor be allowed to drink 3 hours prior to an endoscopy. If there are already digestive issues going on, that is enough time for a grade 1 ulcer to show. A grade 1 ulcer is a reddened spot in the viewable lining of the stomach. The general consensus is that a grade 1 ulcer isn't really worthy of a full-blown treatment program, but definite care should be taken to make sure the horse is on an appropriate eating schedule. If there is still significant reason to believe that a horse is having specific G.I. problems, then chances are, the problem is in the hind-gut.
Colonic ulcers are more difficult to obtain a definitive diagnosis on. At this time there are only two ways to check for them and the best they can do is 'indicate the likelihood';
1) Manure pH can be tested. The correct pH for horse manure is 6.8. Any manure that has a pH level of 6.5 or lower, probably means a horse has colonic ulcers (From what I read, you can test your own manure if you have a food probe pH meter. Never heard of one myself, but you can bet I will be looking for one now).
2) A blood panel will reveal if a horse has low-grade anemia, which is also an indicator of the likelihood of colonic ulcers.
In general both types of ulcers produce similar symptoms:
*Weight Loss and/or a general decline in body condition or performance
*Resistance under saddle, frequent desires to stop and/or stretching out as if to urinate
*Irritability and/or other changes in attitude
*Lack of energy and stamina
*Behavior indicating discomfort-pawing, weaving, frequent laying down and getting up, excessive and uncomfortable looking alterations between resting one hind foot and the other. Colic would most likely be included in this definition, particularly bouts of colic that are not particularly severe, but can be repetitive.
*Wood chewing and cribbing (especially if you have owned your horse long enough to know this was not a previous habit)
*General soreness over the back
Some symptoms that are more indicative of gastric ulcers vs. colonic ulcers are:
*Wind-sucking
*Sensitivity to being touched or groomed around the side(s), around the area where the stomach lies.
Some symptoms that are more indicative of colonic ulcers vs. gastric ulcers are:
*Loose or watery stools or repetitive bouts of diarrhea
*Sensitivity in the flank area
*Sore loin
*Girthiness...Long thought to be a sign of gastric ulcers, more credit is being given to the colonic ulcer because the stomach is nowhere near the girth area, but the colon does lie in that area.
*Difficulty bending, collecting and/or extending
Now here's where things get a little tricky because gastric ulcers are most often the ones that veterinarians automatically want to treat. Treatment for them is readily available and is becoming quite well understood. Unlike humans, gastric ulcers in horses are typically not caused by bacteria, so modifications to the diet (not already optimal) and some sort of treatment will generally clear them up within 30 days. Outside of feeding modifications, treatment for gastric ulcers is mainly about providing some sort of medication that neutralizes the stomach pH long enough to give the ulcer(s) time to heal.
This is kind of the run-down on how many of the current medications stack up;
Antacids only decrease the gastric pH for a couple of hours and to maintain any sort of neutralization have to be given 6-12 times a day. They also do not provide any healing qualities. I read a lot of 'homemade' remedies that included crushing Tums or other over-the-counter Antacids into feed, but it's highly unlikely they do any good because the simple act of eating is going to reduce the stomach acid anyway and the effect of the antacid does not last much longer than a couple of hours.

Ranitidine (better known in human terms as Zantac) is an H-2 receptor antagonist that suppresses gastric acid secretions. Used on an 8 hour schedule it has been shown to help treat and heal gastric ulcers.

Cimetidine, another H-2 receptor (human name correlation, Tagamet) can provide short term relief, but has not shown to actually heal ulcers.
Omeprazole is proving to be the most effective chemical treatment on the market for gastric ulcers. I am again going to quote the article out of the QHJ:

Omeprazole completely suppresses acid secretion by binding with the cell membrane H+-K+ proton pump. The effects of omeprazole can last as long as 27 hours. A dose of omeprozole can suppress gastric acid production within 30 minutes and has been noted at a dose of 4mg/kg to provide significant healing of gastric ulcers in horses receiving NSAIDs when given once daily for 28 days. In one study horses in training receiving omeprozole at a dose of 1mg/kg for 28 days, 82 percent remained free of gastric ulcers when compared to the control group where only 10 percent remained ulcer free.
(American Quarter Horse Journal-February 2012)
As you guys know, I am more of a proponent of the use of natural products than I am the use of chemical ones. My personal feeling is that most natural products work better to bring a true balance back to the system. Rather than rewrite information, I'll simply provide a link to an article written by a DMV...
Natural Ulcer Relief

I will tell you that I have used the Aloe Vera Gel on Moon and he seems to be quite stable. Since he was probably already on his way to healing due to other products and time off, I couldn't definitively say whether that is what helped or not. I did get the chance to test the Aloe Vera Gel on a horse back home and he was markedly better after just 3 days. I also ordered my mom this product to feed him along with the AVG...

The product was delivered the night before I left. The pellets smelled quite yummy. Mom said the horse has been licking up his feed and has made fairly dramatic improvements. Mom had thought the horse had developed arthritis due to some other issues he had going on and he didn't want to move. Now he is back out with the herd and bucking and kicking. Since he wasn't given anything except stuff for ulcers, it wasn't arthritic pain holding him back.

To be continued...
Posted by BrownEyed Cowgirl at 3:35 PM

I am such a horse hypochondriac. If you give me a list of 10 symptoms indicative of anything at all, I'll see one that vaguely fits my horse and immediately decide she's about to die from that malady. Dixie is girthy! Obviously me thinking that she's just a bitch is hateful and wrong and she's riddled with ulcers. SIIIGH.

Well, it if makes you feel any better...I'm the same way. Moon is particularly difficult to 'read'. Now that I have Shooter here I may be able to more correctly identify between what's 'normal' and what's an 'issue'. Since those two are peas in a pod. LOL

Oh yea...and you can just blame the girthiness on her pink skin. ;-)

:blush: Well I wrote a post and clicked submit and went over to google reader and you were at the top! Must've been JUST after you posted it, lol.

Good weight, perfectly even sweat patterns, white MARE who doesn't like to be girthed... I keep telling myself she's just being a mare. Good luck with Shooter!

We went the round of Maylox, Omeprezole, Zantac, Tagamet and several others with no results for hubby's mare.

It wasn't until we put her back on straight alfalfa that she started to come back around. Seems the answer was right there under our noses the whole time.

Thanks for the info! It is good to know and handy to have a check list.

Hope I never have to deal with it, but it is good to know the info is out there from someone who had done it before.

Hurry and do the colonic ulcer post! Lilly has displayed a lot of different ulcer symptoms in the past, but we're doing SO well these days since all the changes that I've made to her diet and to her hooves. We're still dealing with the chronic drippy stuff that I'm constantly cleaning off her hind end, though. Her manure isn't "runny", but it's not like typical road apples either.

I have also noticed her getting a little bit girthy (she just steps around a bit when I'm trying to tighten the saddle) which she has never done before. She also has a much heavier workload, so the colonic ulcers could be showing up that way too.

Sorry to write a book... anxiously awaiting the next post!!

Thanks for this nice share.
I am waiting for the next segment.

VERY interesting. I can't wait to hear info on the colonic ulcers. And I plan on testing pH. lol

I started reading this, then Sug colicked on me. Seriously, 3 days no sleep, mild, vague colic. No freaking vets available in my area, all tied up with emergencies or out sick. Seriously, Vets should not get sick days. Can't they just vaccinate themselves against illness?

ONE call to my old vet 100 miles away. Call returned in 5 minutes. Five freaking minutes! I waited hours for some of the local guys to call back!

In 30 seconds, I had my diagnosis. Ulcers. Sugar is so calm and mild mannered that I didn't even think of ulcers until she mentioned it. Seriously, I've been treating Flirt as she's been a nutjob handful. Then again, she's TB and probably had a low level ulcer for years! YEARS!

So, Sug has a gastric ulcer. I'm starting her on U-7 Finishline, which has aloe vera gel in it. I wasn't sure if you were in air today or not, and I can't find your number (although I remember you gave it to me). When you get the chance, please get my number from MM and give me a call. I'm feeling like such an idiot for not realizing what Sug's issue was. Btw, first colic of any form in 20 years of having horses and working around horses. EVER.

Off to read the next post on colonic ulcers before I get some much needed rest, now that I know my mare won't die overnight!

Abprazole is specially formulated enteric coated granules of Omeprazole which protect the Omeprazole from the acidic conditions of the stomach allowing it to dissolve in the intestine for proper absorption.